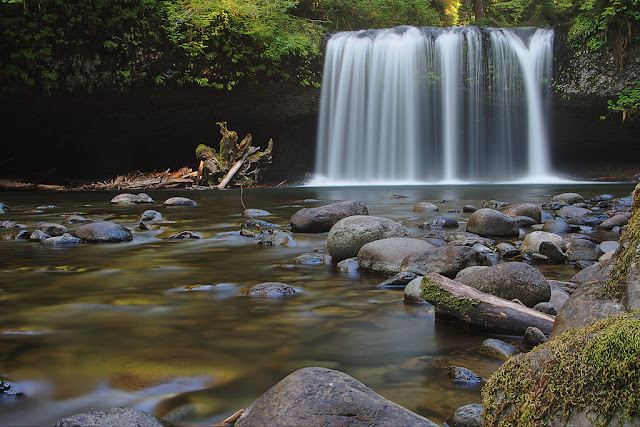 Some people seem to think that all photographers have to do is push a little button. Often the making of a photograph is much larger adventure than they could even imagine. Above you can see what has come to be one of my favorite images, the making of which definitely included an adventure. I'd like to tell you about that adventure.


On December 1st of 2011 I decided to venture to a location I had never been. I enjoy waterfalls, so I had been searching for some nearby ones that I could visit. Sure, Silver Falls State Park is fairly close, and easy to get to, but I wanted something new.

So, I followed my Google Maps directions and headed out to Butte Creek Falls. The route included a few miles of unpaved roads. I initially missed my turn, which was not marked as I had expected, but I realized it and turned around before getting completely lost. Finally I made it to a fairly nondescript trail head with a small parking area. I was the only one there.

Not having been there before, I wasn't entirely sure which way to go. The trail led off in a couple of directions, so I chose one and headed on down. Shortly I came to this sign. 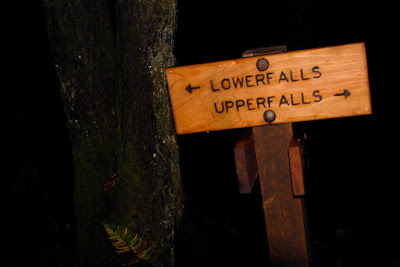 I chose the upper falls. It was a wise choice, although either was a good choice. 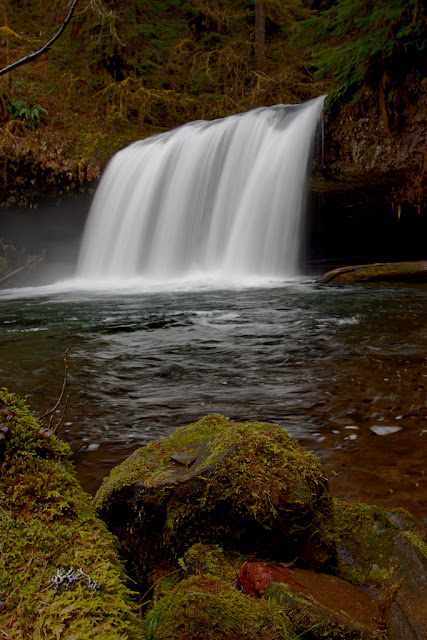 Upper Butte Creek Falls is the shorter of the two, but as can be seen is still quite picturesque. I took a few shots, but I was determined at that point to return again for a better shot. The next stop was the lower falls. 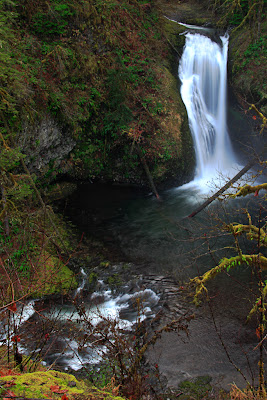 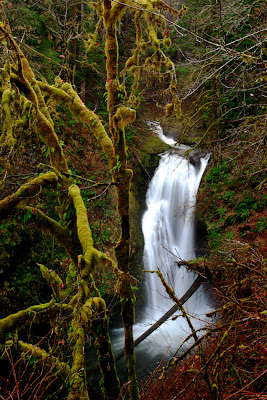 Viewing of Lower Butte Creek Falls is done from the top of a narrow rocky ridge. A fall down either side could be disastrous. There is a narrow path that leads down from this point, which I was not about to attempt due to the fact that I was alone, a chicken, and the paths were wet and potentially slippery. I finished up and headed back to the car, wanting to be off the trail before it got dark.

Fast forward a few months now to July 8th, 2012. I planned an outing to shoot waterfalls with a couple photographers I had met through Google+, +Tawni Henlin and +Wendy Chase. Butte Creek was definitely on the list of falls to visit.

We decided to visit another fall that was new to all of us first. We traveled a ways east of Salem and hiked in over a mile to end up at Shellburg Falls. 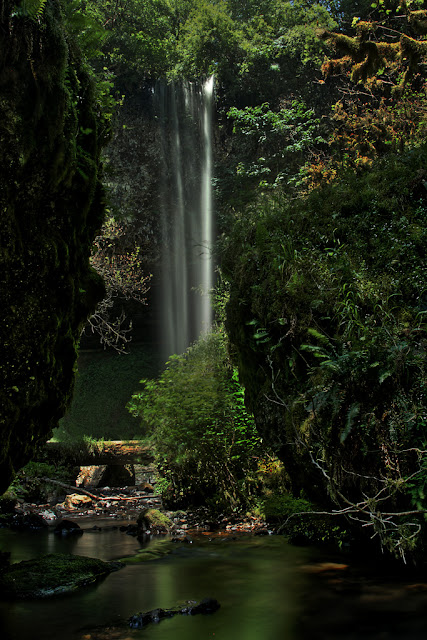 A first for me, I shot this fall from the water. Definitely not a last though. It certainly allowed for a better perspective on the falls. We spent some time shooting here, then made the hike back to the car to continue on the day's adventure. I think our only regret here was not finding the parking area that would have avoided so much hiking.

This is the part where our adventure took a more dramatic turn. I had no problems finding the Butte Creek Falls trail head this time. When we arrived there were certainly many more cars than there were back in December when I had visited.

Upon exiting the car I immediately noticed what appeared to be a trail of some sort of fluid that had come from my car. It definitely wasn't a good feeling to realize that we had car trouble in the middle of no where. Shortly after we arrived, some other people drove up and said that they had followed "the trail" for several miles.

I will quickly admit that I know next to nothing about vehicles. I can drive them, I can change a tire or oil if necessary, but that's about it. The guys that had driven up were much more knowledgeable and confirmed that we were in real trouble, it was transmission fluid.

There is absolutely no cell phone coverage at Butte Creek Falls. None. Thankfully, one of the guys drove me up the road a ways to find a signal. I told Tawni and Wendy to go have fun and take their photos while I tried to get some help.

We did get a weak cell signal, and I tried calling AAA first (Tawni had given me her card) only to find that they were of no help where we were, and would have only moved us 3 miles before we had to start paying anyway.

Then I called my wife. I did my best to explain the situation, and where we were, and so on. She quickly loaded up the children and went to buy some transmission fluid. Finally, after getting a bit lost, she managed to find us.

While waiting for our rescue, I took my camera down to get "my shot" that I had waited to make since December. I had wanted to get the shot from downstream, to be in the water. It is what I had envisioned from the time of my first visit, and I made it a reality. The shot was not possible from the path, and I knew what I wanted.

So, as you can see, it's not always as easy as just pushing a button.

What about the car? Well, we poured some transmission fluid into it and made it back to Salem. It had never had any problems shifting, which is why I had never suspected any trouble during all those miles we had been leaking fluid.

We took the car in to get diagnosed, and they wanted much more money than I wanted to put into the car. Half a bottle of leak stop later and it seems to be doing fine. I've been driving it back and forth to work, and even a couple of longer trips, with no problems. I'm just not taking it on any adventures any time soon.

I'm sure that Tawni and Wendy won't be forgetting their day with me for a long time. At least it not all bad memories.